The land that is known as Cass Park came to the City of Ithaca in several different parcels. One area was acquired in 1925 as part of lands put in trust for the City by former Ithaca Mayor Newman and others. Previously, in 1908, the City purchased an area between the Inlet and the lakefront. These lands were originally earmarked for a municipal lakefront park. When the Inlet was dredged for the Barge Canal in the early 1900s, the marshland to the west was filled in and planted with peach trees. The orchard was not successful and the area eventually became a flying field. This area was leased to the Thomas-Morse Aviation Company for the testing of airplanes and for an aviation school before, during, and after WWI. Eventually the land (about 122 acres) was developed and used as a municipal airport (the third-oldest airport in the United States).

In 1929 the City bought several small pieces of property between the railroad tracks and the Inlet. The area was called Silent City, a collection of shacks put up in the late nineteenth century and later abandoned. The shacks were removed as a part of the park project. The last parcel was acquired by the City in 1966. It was owned by the Lehigh Valley Railroad and included the old railroad loop. A city marina was built and in the early 1970s, the State took over the area and constructed the Allen H. Treman Marina, at about the same time that Cass Park was developed. A few years earlier the flood control channel was dug and the dredged material from the channel was used to fill the area that is today the southern portion of Cass Park. Development of Cass Park continued through 1971 and 1972. A covered ice rink was opened in November 1972, followed in the summer by the opening of an Olympic-sized swimming pool and several ball fields. Today Cass Park is a regionally active park used heavily by residents from all parts of Tompkins County. In addition to the ice rink and swimming pool, there are four tennis courts, 20 athletic fields (4 of them lighted), playground equipment, an exercise trail, a large picnic pavilion and the Ithaca Children's Garden. 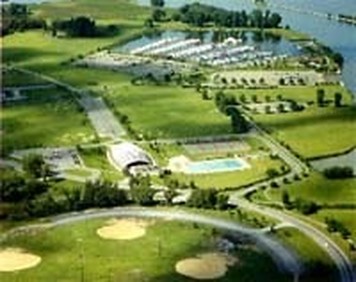